Independence Hall in Philadelphia is one of America’s great historic buildings, where the Declaration of Independence and the Constitution both were adopted. This you probably already knew.

But fewer people know that the block of Chestnut Street upon which Independence Hall sits is named Judge Edward R. Becker Way. Judge Becker, of course, was one of the Third Circuit’s great judges, sitting from 1981 through his death in 2006.

Indeed, I’m mortified to admit that, until last Friday, I didn’t know that that block was named for Becker. I was fortuante enough to have lunch on Friday with Roy Englert, a superb appellate lawyer practicing in Washington D.C. with Robbins Russell who has appeared often in the Third Circuit. Right after our lunch, Roy emailed me this photo he’d taken during his walk back to his car: 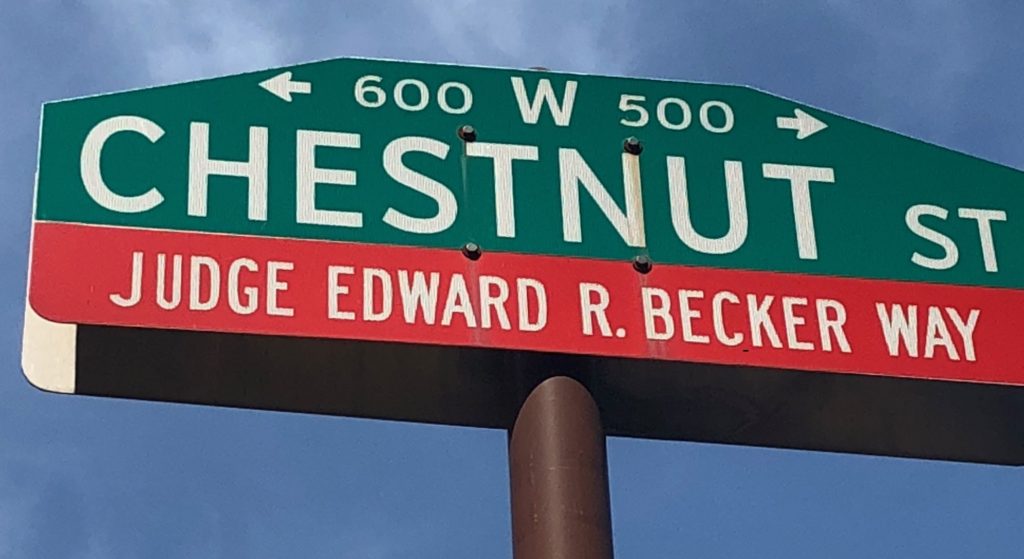 It made my day.

It also got me to wondering why. Sure he deserves it, but even Third Circuit nerds like us can admit that being a great judge isn’t always the road to … having a road named for you.

Here’s how it happened. After the attacks of September 11, 2001, the National Park Service closed the block of Chestnut Street in front of Independence Hall for security reasons. Becker thought this was a bad idea, and he led a successful 19-month campaign to re-open the block. As Becker friend and EDPa Judge Michael Baylson described it years later, “He was outraged that this national landmark was being held hostage to a vague fear of terrorists, and thought that the safety of Independence Hall could be ensured without closing this important street. He had not forgotten aggressive advocacy. Ed’s efforts succeeded.”

After Judge Becker’s death in 2006, the city renamed the block in his honor. In the words of the city’s mayor:

“Gov. [Ed] Rendell and I agreed, it is fitting and appropriate that the city honor Judge Becker **** “His leadership on this issue involving our liberty and freedom epitomized his public service to Philadelphia for 40 years. He will be missed but his impact on the city will never be forgotten.”

So next time you walk past Independence Hall and the Liberty Bell near the Third Circuit courthouse, take a moment to admire the street signs, too, and to remember Edward Becker, one of the Third Circuit’s judicial giants.