Yesterday I blogged here about AOC stats appearing to show a jaw-dropping jump in 2017 in the number of Third Circuit cases (a) decided after oral arg, (b) by published opinion, and (c) reversing. The post was by-and-large accurate, but the AOC data it was based on was wildly misleading.

That becomes a problem when, after one oral argument, a court issues one published opinion reversing over 500 cases. Which is what happened in March 2017 in In re: Fosamax. (My thanks to Twitter user @VillanovaRhodes for spotting Fosamax as the source of the problem.)

In my view, the AOC’s data-reporting methodology is flawed. Counting one oral argument, one opinion, and one reversal 500 times renders otherwise-valuable data useless and–at least for dummies like me–misleading.

In any event, I sincerely apologize to readers for failing to interpret the statistics correctly in my original post.

UPDATE: The data described in this post, while presumably accurate, is spectacularly misleading. The apparent cause of the problem is that the AOC reports the number of cases decided after oral argument, by published opinion, and reversing — not the number of oral arguments, published opinions, and reversals. That becomes a problem when, after one oral argument, a court issues one published opinion reversing over 500 cases. That’s what happened in March 2017 in In re: Fosamax. My original post illustrates how, in this unusual situation, the AOC’s data-reporting methodology renders important data worse than useless.

Astonishing changes in the Third Circuit’s handling of cases occurred in 2017.

Two years ago, I wrote what I consider one of most significant posts I’ve done on this blog. The gist was clear from the title: “Guess which circuit holds the few oral arguments. (Hint: it’s the same one that issues the fewest published opinions.” I described how the Third Circuit’s rate of oral-argument, publication, and reversal all had plummeted between 2009 and 2014.

I didn’t post an update here last year, but the basic picture remained the same, with the Third Circuit still holding fewer arguments and publishing fewer opinions than any other circuit, even ones that decided far fewer cases.

Two days ago, the federal courts released last year’s court statistics.* I looked at them today, and my jaw is on the floor.

Compared to the prior year, the percentage of cases in which the Third Circuit held oral argument more than tripled.

The percentage of cases in which the Third Circuit published its opinion more than quadrupled.

The percentage of case in which the Third Circuit reversed more than quintupled.

Just look at these graphs: 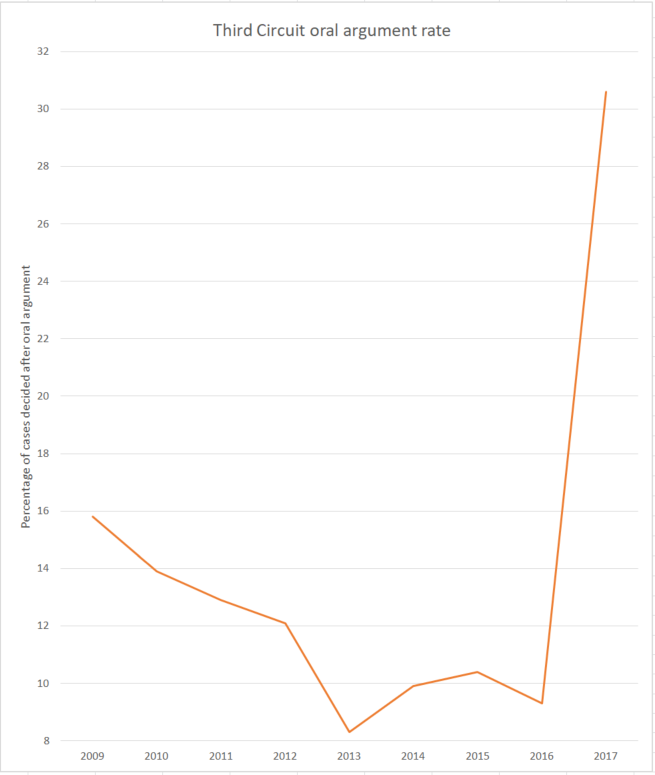 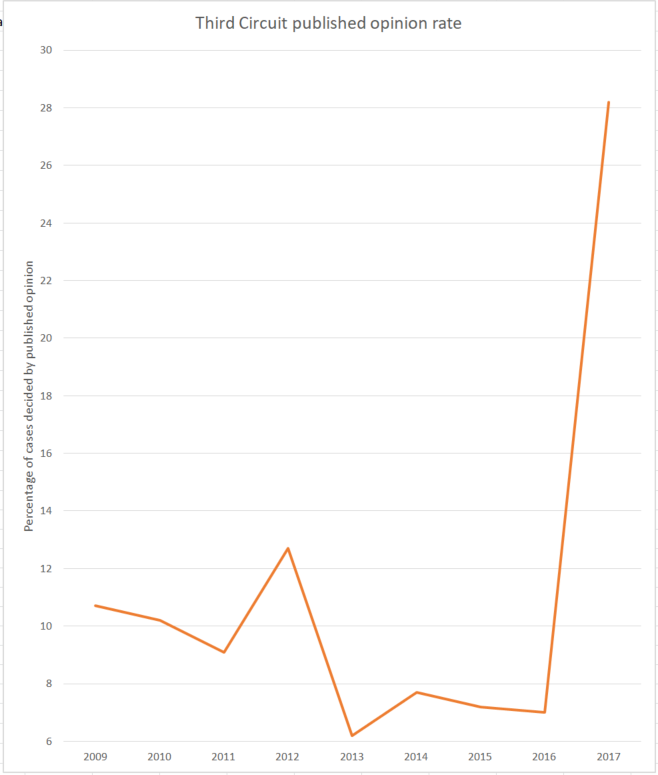 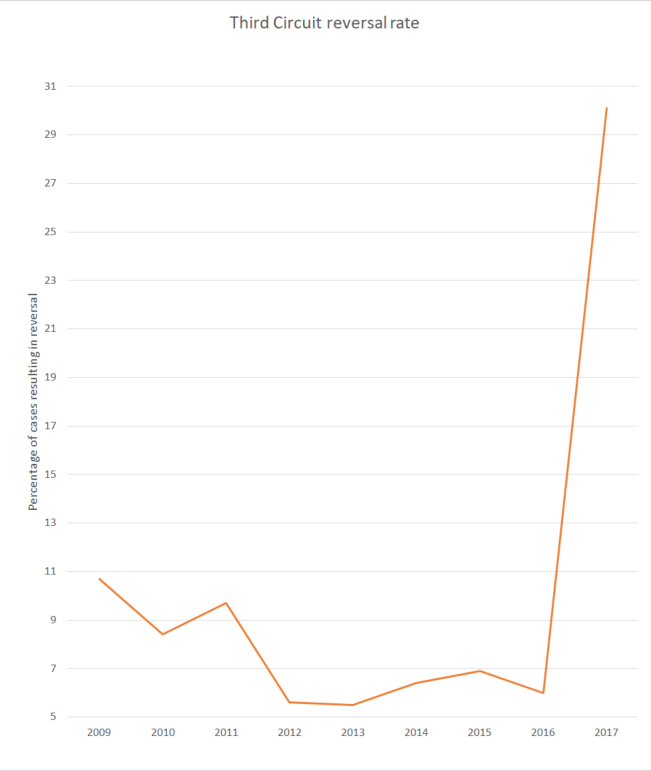 Have I conveyed my astonishment?

If you’re wondering if this reflects a national trend, at least at first glance I’d say no. Nationally, the argument rate and the publication rate ticked up just a couple percentage points last year, while the reversal rate was up just over 1%. I’d guess CA3 alone accounts for a good chunk of those small increases.

Here are some more numbers that jumped out at me:

There you have it. If you’re wondering how to explain all this, well, so am I.

UPDATE: I have serious doubts about the accuracy of these statistics. The one that’s easiest to check is the number of published opinions. As best I can tell from online searches, the court published about 182 decisions between 9/30/16 and 9/30/17 — a very far cry from the 741 reported, and much closer to the 154 it published the year before. And, come to think of it, I summarize every published opinion as it’s written, and I’m pretty sure I would have noticed if the court had gone from 3 or 4 published opinions a week to 14 or 15.

So, all of these numbers should be viewed with considerable skepticism until confirmed.

Over the last six years, CA3’s use of visiting judges — any judge who’s not a Third Circuit judge — has plummeted:

Here is how the Third Circuit compares to the other circuits for 2013:

So the Third Circuit is using fewer visiting judges than it did, but why? It’s not due to fewer appeals. This chart below shows how many times a judge was assigned to a Third Circuit merits panel per year:

The AOC has released the most recent batch of federal court data, for the year ending in March 31, 2013.

Nationally, the total number of cases filed has been dropping since 2006.